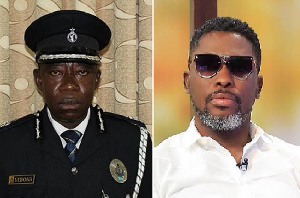 Kwame A Plus, musician and political activist, has vowed to see to the removal of Director General of Police, Ken Yeboah, from office.

His reasons were not made clear when he made the disclosure via a Facebook live session in which he speaks extensively about his recent public spat with Bono Regional Chairman of the ruling New Patriotic Party, Kwame Baffoe Abronye DC.

A Plus cautioned Abronye to learn how to play the game of politics and not needlessly get himself arrested as happened two weeks ago when police detained and charged him for publication of false news after he peddled an untruth about ex-President Mahama.

He made reference to a threat to beat him up, which Abronye reportedly made on Accra-based Okay FM and promised that if they ever met, he (A Plus) will order his boys to ‘touch’ Abronye.

“You sat on Okay FM to say if you meet me you will beat me. You are being untruthful; we have never met one on one before.

“And anyone who knows me, knows how I walk, so get prepared. Because if I see you one on one, it will be about self-defence because you have fired an initial threat to beat me …if I see you, I will let the boys touch you,” he said.

He continued with a caution to Abronye that even if he is ‘touched,’ “… you cannot go and call Ken Yeboah, (Head of Police CID) or any police because even he Ken Yeboah, I am working to have him removed. He has been my target for very long.”

A Plus who has publicly boasted about being an acquaintance of Inspector-General of Police, George Akuffo Dampare, said he had reported the CID boss to the IGP on issues he did not disclose immediately.

“I have told the IGP that Ken Yeboah is not helping his cause, so stop boasting with the name of Ken Yeboah, I don’t fear him. I have said it and I am saying it here, let someone send it to him.

“What he did was very very dangerous but it was because of some people that I have been quiet for a long time. We are the gods in this country. I have told Dr. Dampare that this guy is a very dangerous guy,” he added.

Dampare and Yeboah were both promoted in 2020 by former IGP James Oppong-Boanuh, upon Boanuh’s retirement, Dampare was picked as Acting Police chief starting August 1, 2021, till he was confirmed later by President Nana Addo Dankwa Akufo-Addo.