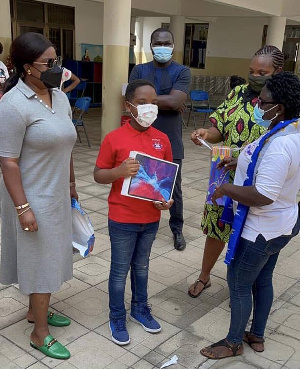 • Oswald went viral for his ‘Our-Day’ letter to his parent

9-year-old Oswald has been trending on micro-blogging site, Twitter, for telling his parent what she should get him for his ‘Our-Day’ celebration.

This got several reactions from both known and unknown people in the country.

From KiDi’s performance to several brands making donations to him today, Jane Naana also promised to get the young boy an iPad.

The 2020 running mate of the National Democratic Congress (NDC) has delivered her promise as the ipad pro has been handed over to Oswald.

“My iPad pro gift to young Oswald has just been delivered to him. Keep studying #OurDay,” another tweet read.