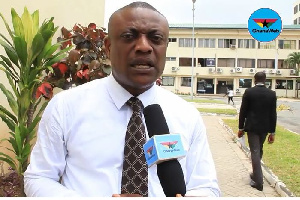 Making a submission on Wontumi TV, lawyer Maurice Ampaw found the claim offensive as he mentioned that the comedienne has defamed the mining magnate because there is no iota of truth in her narrative.

“Jesus Christ! When did Chairman become your ex? So, Afia, all the men you’ve been following, you still want an ex?” a livid Maurice Ampaw fumed while touting Chairman Wontumi for being a responsible man.

Ampaw did not only poohpooh the credibility of Afia Schwarzenegger; he also implied that the comedienne is not worthy to be Wontumi’s partner, trumpeting that the businessman has civilized wives and would not desire the showbiz personality for any reason.

“I don’t know the kind of woman you are. You speak anyhow. You’re inconsistent. You’re always changing your claims. You’ve shown you’re not truthful. You’ve shown that aside from not being truthful, you are very ungrateful.

“Chairman says Afia is not his standard. We all know Afia’s track record. So how can Chairman Wontumi who is wealthy, handsome and has well-cultured women, women of substance as wives; not even girlfriends come after someone like Afia?”

According to Ampaw, the allegations by Afia Schwarzenegger are baseless, inspired by pain and unremitting desire to dent the image of the politician. Without mincing words, the legal brain disclosed that Afia Schwarzenegger will soon be dragged to the court to prove her claims.

“Get ready. You’ll go to court. You’ll get a writ from Tema High Court. We will sue you so you tell the court when you had sex with Chairman Wontumi,” Ampaw said. “We act as though we have thrown our moral values to the dogs. We will report you to Dampare (IGP) for spreading fake news.”

Afia Schwarzenegger has been in the news after labelling her fellow woman who she claimed was forty-seven (47) years old barren. Although she did not disclose the identity of her target, some concluded it was a staff of Wontumi Radio. The said staff, according to reports, was chosen ahead of Afia Schwarzenegger who had earlier served indication of joining the Accra-based radio station.

Valentina Nana Agyeiwaa, as the entertainer is known in private life, was vehemently chastised by a section of the public over what they described as unsavoury descriptions. The backlash, however, did not scare the comedienne as she made a comeback with more derogatory remarks.

In her fury, she said: “Now that I have your attention… I Queen Afia Schwarzenegger will never ever work with my ex regardless of the money involved. I can’t disrespect my man like that. Aunty 2nd choice, you won nothing… You were offered what I rejected… Where were you when your boss sorry my ex was kissing my ass just for logo? Whiles you are at it, ask him how much he paid for just a picture… I’m not cheap like you…”