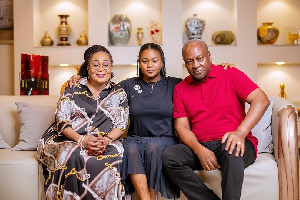 Former President of the Republic of Ghana, John Dramani Mahama has taken to his official Facebook page to celebrate his daughter and youngest child, Farida Mahama.

John Mahama published a family photo of himself and his wife, Lordina Mahama with their daughter seated between them as he expressed his love for their lovely daughter.

In the same post, the former president advised her daughter to be courageous and continue to be herself.

“Baby of the family. All so grown up already. Happy 15th birthday, Farida. Lots of love from me, your mother and brothers. Continue to be yourself and grow beautifully,” John Mahama’s post on Facebook read.

The daughter of the former president is currently trending on the internet but not because of her birthday.

A twerk video of the former first daughter of the country was leaked on the internet.

The video caught fire and went viral. It is for this purpose that Farida Mahama is trending.

According to Farida, the 1-minute 35 seconds video is a tutorial to show her followers how to twerk.

The video was recorded for her private Snapchat story but ended up in the public.

Reactions from netizens to the video have been of mixed feelings. While others are accusing the former president of failing to raise a good child and put his home to order, some believe that Farida should be left alone to have a private life.