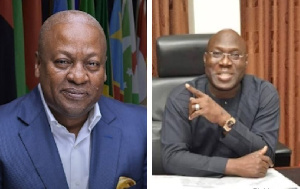 Former President John Dramani Mahama’s name has been cited in a new document by the Ministry of Lands and Natural Resources giving clear details on matters relating to lands at the Achimota Forest Reserve.

The document released by Samuel Abu Jinapor, the sector minister said, “On 20th March 2013 the Family (Owoos) again petitioned the then President of the Republic HE John Dramani Mahama for the release of the portions of the land.

“On February 2014, the Forestry Commission and the Owoo Family Executed a Deed of Variation to the 2013 leases as a result of what was described as ‘an omission of the root of title and the actual size of the end land.

“By the said 2014 Deed of Variation, the Forestry Commission granted one Owoo Family another fifty point zero nine acres, bringing the total acreage grated to the family to One Hundred and Ninety-Eight point Fine Zero acres. In a letter dated 4th April 2014, the then Minister for Lands and Natural Resources, Hon Alhaji Innusah Fuseini, MP, wrote to the Lands Commission to amend its records to reflect the grants made to the Owoo Family.

“The Ministry intends to initiate a process of an independent audit on the specific issues of acreage de-gazetted and will act accordingly in the public interest, should that become necessary,” the document read in parts.

Jinapor assured that the government was going to act on all improper acquisition of lands in the country.

The statement noted that all past and present wrong acquisitions of lands would be dealt with accordingly.

“Government will act on any improper acquisition of any public lands regardless of how it was procured, whether now or in the past, and the Achimota Forest lands will not be an exception,” the Ministry said while indicating that the alleged will of the late former Chief Executive Officer of the Forestry Commission, Kwadwo Owusu Afriyie (Sir John) is a subject matter for litigation in court.

“Preliminary inquiries reveal that the alleged will in question is a subject matter for litigation / Contestation in court.

“Further checks at the Lands and Forestry Commission, the repositories of the records of the land in question show no record of ownership of lands at the Achimota Forest of Sarkumono Ramsar Site, by the late Kwadwo Owusu Afriyie.”
Background

There were news reports earlier this week suggesting that the Government has gazetted an Executive Instrument (E.I.) to approve the redesignation, sale or development of Achimota Forest.

A document from the Ministry of Lands and Natural Resources, making reference to an Executive Instrument, stated that the Achimota Forest Reserve is to no longer be regarded as a forest reserve.

The gazetting notice led to allegations that forest land was being sold, but Samuel Abu Jinapor, Minister, Lands and Natural Resources, dismissed the accusations at a press conference stating that the Executive Instrument, E.I. 144, pertained to 361 acres of peripherals of the Achimota forest.

He added that the government is returning it to its custodial owners, identified as the Owoo family because the land was not being used for its intended purpose, which included the extension of the Achimota School.

Days after that, a purported Last Will and Testament of the late Forestry Commission CEO, Kwadwo Owusu Afriyie, also known as Sir John, has become public.

Page 5 of Sir John’s Last Will, available to GhanaWeb, states that the late CEO of the Forestry Commission together with one Charles Owusu, have already secured parts of the Achimota Forest lands.

Sir John per the document confirmed owning portions of Achimota Forest land and that he gives his portion to his nephews, Michael Owusu, Yaw Boadu and Kwabena Amoateng, forever.