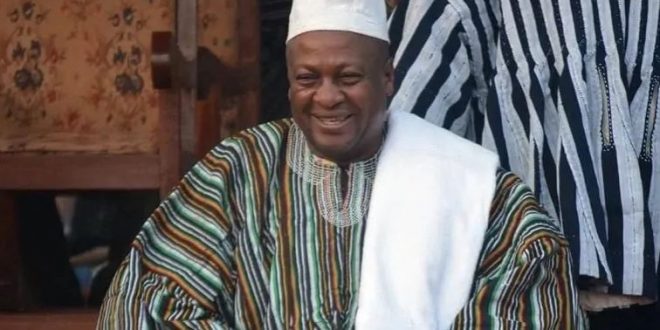 Former President, John Dramani Maham has been enskinned as the Chief of Truth in Bole in the Bole District of the Savannah Region where he hails.

Addressing the Chiefs and elders of Bole where he hails, the leader of the National Democratic Congress said “I want to thank the Bolewura for the honour that has been done me by installing me as the kasintenwura. Kasintenwura means the Chief of Truth and as we all know the truth is only one and the truth never fails.”

He indicated that Ghana has over the years been peaceful and the citizens have lived in peace with one another but recent events under the current government where Soldiers are been used to intimidate people has marred the peace the country has always enjoyed.

John Dramani Mahama noted that now, Ghana is currently divided but the NDC government that will take over the governance of the country in 2021 will give equal rights to all citizens of the country.

He noted that the NPP government led by Akufo-Addo has left Ghanaians in a troubling state with hardship but the NDC will take over tin 2021 to better the fortunes if the Ghanaian.

“We’ve been in this country for the past four years and everybody is suffering hardship, businesses have been collapsed. If you don’t belong to the ruling government your business is collapsed, people have been sacked from their jobs, the economy is in shambles, we have Coronavirus and the government is not able to protect the people, NDC is coming back to take care of all these things.”

Previous Yeji: Farmer Arrested For Killing His Friend Over Ghc50
Next You mean my ex-husband sexually transmitted NDC to me? – Rasheeda Adams replies Oquaye