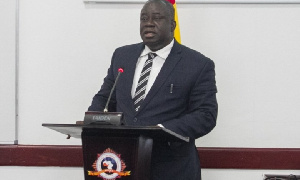 It is reported that Joshua Kyeremeh, National Security Coordinator, has died in Accra, following a short illness.

Disclosing the news of the death to Asaaseradio.com, a leading member of the National Security Secretariat said that he died at the Ga East Municipal Hospital.

According to the report, checks by the station at the hospital indicated that Kyeremeh died from kidney complications on the morning of Monday, January 18, 2021, where he was receiving treatment for COVID-19.

Joshua Kyeremeh was appointed by President Nana Addo Dankwa Akufo-Addo in 2017, as part of the president’s first set of appointees in his first term.

A product of the Kwame Nkrumah University of Science and Technology, and a former Director of the National Intelligence Bureau (NIB), formerly known as the Bureau of National Investigations (BNI), the consummate intelligence professional had, until his death, been National Security Coordinator.

For 22 years, Joshua Kyeremeh worked at the NIB, serving at command levels in the Northern, Upper East, Ashanti, and the Greater Accra regions.

He also served as the head of the Investigations Unit of the Bureau, rising to become the Deputy Director and ultimately, the Director from 2005 to 2009.

His last official duties were with the transition team after December 7, 2020, elections composed by the president.