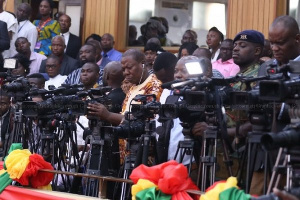 Panellists at the 2022 Turkiye-Africa Media Summit have observed that journalists in Africa are struggling and depressed and must be helped.

They noted that the level of depression in the media profession continued to be swept under the carpet with mental health issues among journalists going unreported.

The panellists said the poverty level on the continent was huge, with journalists and media workers, who were changing lives and societies being among the poorest though described as the fourth estate of the realm.

“Journalists shape lives and societies and bring about social change and must be supported and empowered to live and work in sound mind and body,” they stressed.

The panellists recounted challenges journalists and media workers faced during the peak of COVID-19 and said many lost their jobs, some died having had COVID-19 in line of duty, with many more enduring abuses and attacks.

“Even before COVID-19, many media houses were distressed. COVID-19 worsened the situation, especially for print media houses.

The panellists called for contextualisation of information and support for media workers, especially those in the state media to fight fake news, misinformation, disinformation, “terror-propaganda” and to defend democracy and nation states.

Earlier, Professor Fahrettin Altun, the Director of Communications, Republic of Turkiye, called for experience sharing in media and communication to fight “terror-propaganda.”

He said Turkiye would support efforts at fighting discrimination, climate change and the promotion of good African practices in Turkiye and around the world.

Other topics discussed were: “Journalism under digital siege,” “Women in Journalism,” and “Challenging conventional narratives of African storytelling.”

The Summit is being attended by hundred journalists from Africa and representatives from Turkey’s official institutions, non-governmental organisations, think-tanks, media and private sector.