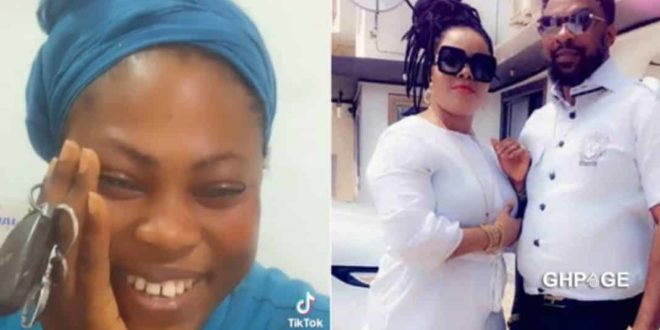 Joyce Blessing has finally had the last laugh and Nana Agradaa won’t like hw she would be taunting her in the next couple of days ahead.

In December last year after rumors went viral that Joyce Blessing’s husband has found that one of their children is not biologically his after a supposed DNA test.

Nana Agradaa was part of the many Ghanaians who blasted and attacked her for disgracing the Christendom.

According to Agradaa, she knew a day like this would come when God would embarrass Joyce Blessing for being pretentious.

She described it as an abomination for one claiming to be a servant of God to be caught in such a scandal and advised the singer to get a pastor for deliverance.

She sent a strong admonition to church leaders never to engage Joyce Blessing in any activity unless she openly confesses her sins.

However, Nana Agradaa is currently having a dose of the bitter drugs she gave to Joyce Blessing.

The former fetish priestess has being beefing her own husband for two weeks now on the grounds that their spiritual father has almost collapsed their marriage.

In one of her IG live videos, Nana Agradaa cried over how she bough late Apraku My Daughter’s church building for 9 billion for her husband to become an independent man of God but the investment has gone down the drain because he’s still with their spiritual father (Sofo Kyere).

In another video also, Nana Agradaa threatened to chase her husband with a cutlass if he ever changes his mind to come back to work with her after she has made it big in the gospel ministry.

Joyce Blessings who has been following Nana Agradaa’s online feud with her husband has dropped her first reaction to the whole brouhaha in a latest video.

In this video, Joyce Blessing mocked Nana Agradaa for enduring the martial woes she suffered sometime ago and cluelessly judged her wrongly.

She also ridiculed her 9 billion church investment that has no future looking at how things are unfolding.

Unforgiving Nana Agradaa will drop a video in the next few hours to slam Joyce Blessing back because never forgives people who cross her line.

Previous VIDEO: I can no longer be your friend – Amerado tells Delay
Next Nigeria: Suspects behind Owo church attack revealed