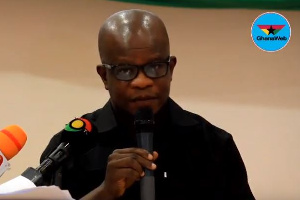 A Senior Research Fellow in History and Politics at the Institute of African Studies of the University of Ghana, Dr. Michael Kpessa-Whyte, has linked the ruling of the Supreme Court in the matter of the constitutionality of a sit-in Speaker of Parliament to vote or not, to military takeovers.

In a tweet shared by the lecturer, he said that the import of the ruling of the apex court is no different from what coup plotters do.

The Supreme Court ruled on Wednesday, March 9, 2022, in a case brought to it by a law lecturer, Justice Abdulai, seeking the interpretation of the court on whether or not a First Deputy Speaker of Parliament, while presiding over the House can still cast a vote.

In a unanimous decision of 7-0, the SC ruled that any sit-in Speaker can still cast a vote, contrary to the Standing Orders of Parliament.

This ruling has however received several reactions from across board, for and against it.