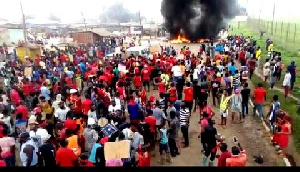 The Ghana Police Service has stated that it is unable to provide protection for a group of persons who have indicated their intentions to demonstrate on the streets of Accra for a period of three days.

The demonstrators, including broadcasters Captain Smart and Okatakyie Afrifa, asked the police to allow them to carry their own registered weapons to the march, as well as requesting of the Service to allow them use private security.

“We will bring our own security company to provide protection to demonstrators. All weapons held by demonstrators or by the contracted security personnel will be for personal protection only; and all weapons will be duly permitted in accordance with the Arms and Ammunitions Act, 1972 (NRCD 9) e) Proposed route and destination: We expect that the Demonstrators will gather at Circle,” the statement said.

But a response from the police has stated that this cannot be allowed because the group’s intentions are in contravention with Public Order Act.

“We would like to assure the public that the Police Service is ready and willing to provide the necessary protection for any lawful demonstration in the country.

“However, in this case, the Service is of the view that the nature and character of the demonstration as intended, is inconsistent with the Public Order Act.

“We are therefore unable to provide security for a demonstration which is in flagrant violation of the Public Order Act, 1994 (Act 49) and has the potential to result in a breach of public order and public safety,” the statement said in part.

Furthermore, the statement indicated that the Service had reached out to the group to reconsider its decision and work together with it to achieve their intentions.

“The Service has reached out to the organisers to reconsider their proposal and work with the Police towards the organization of a lawful, peaceful and successful demonstration.

“We wish to assure the public that in the interest of public safety and security, the Police are putting in place all necessary measures to ensure that unauthorised persons do not match the streets with weapons,” it added.

Read the contents of the full statement below: