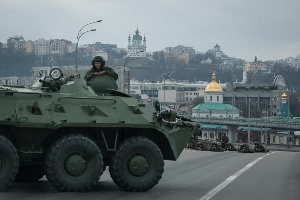 Member of Parliament for North Tongu, Samuel Okudzeto Ablakwa, has revealed that a train that was carrying some Ghanaian students was attacked by the Russians in Ukraine.

He said this on the Key Points on TV3/3FM with Dzifa Bampoh on Saturday February 26 while commenting on the decision by the Government of Ghana to evacuate Ghanaian students from Ukraine.

The Government of Ghana finally decided to evacuate Ghanaian students to neighboring countries – Moldova, Belarus, Slovakia and Hungary – due to the Russia-Ukraine conflict.

A statement issued by the Ministry of Foreign Affairs and Regional Integration on Friday February 25 said “The Ministry through its Mission in Berne, Switzerland and the Honourary Consulate in Ukraine are in touch with the Ghanaian students in Ukraine through their leaders.

“A list of students has been compiled to facilitate an evacuation exercise.”

The National Union of Ghana Students (NUGS) had maintained that evacuating Ghanaian students from Ukraine is the single most effective response to the conflict.

In a petition to the government on Friday February 25, NUGS said “We therefore make the following recommendations which must all be geared ultimately towards evacuation, Parliament should direct and supervise our mission in Switzerland through the Ministry of Foreign Affairs to take immediate steps to make food, water and sanitary materials available to students while preparation for evacuation is underway.

“The embassy must improve its communication with students and establish formal means of giving out information to reassure the students who are losing hope in our systems.”

The Government of Ghana had earlier expressed concerns about the safety of Ghanaian students in Ukraine following the conflcit with Russia.

In series of tweets on Thursday February 24, the Ministry of Foreign Affairs and Regional Integration said “The Government of Ghana is gravely concerned about the security and safety of our over 1000 students and other Ghanaians in Ukraine and has asked them to shelter in place in their homes or in government places of shelter, as we engage the authorities, our relevant diplomatic missions and our honorary consul on further measures.”

Reacting to the new development, Mr Ablakwa said “I must say that the latest shift in position by the government to take concrete steps to evacuate our nationals particularly, students stranded in Ukraine is a positive development.

“I will like to commend the government for this major shift in position. You will recall that earlier in the week, when the only indication was that the students should take shelter and go into hiding, I said that it was inadequate and that it was not a helpful posture particularly, considering the fact that other countries were taking more pragmatic steps to take their nationals out of danger zone.

“I have been in touch with student leaders in Ukraine, NUGS-Ukraine, they tell me that the Polish border appears too choked now, and so, they are using the Slovakia, Hungary and Romania border points. Our diplomatic mission in Berne Switzerland is in touch with them giving regular updates, arrangements have been made across the border to meet those who are on the first train.

“I have seen the movement plan of some other buses that are moving from some different cities particularly in Kyiv later today. I think these evacuation arrangements are heartwarming and we should keep our praying and our thoughts with our nationals in Ukraine. Let us pray that the good Lord will bring them out of harm’s way to safety.”

He added “There was some little skirmishes yesterday, which I followed keenly. Some of our students who were in the train which came under attack from the Russians. Thanks be to God they escaped unhurt. It is quite a dangerous situation and so far, it is to the Glory of God that none of our nationals has been hurt or part of the casualty numbers and so its is really positive.”