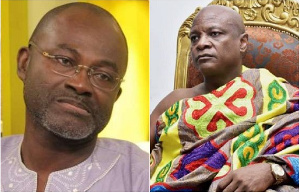 The Secretary to the Asogli State Council has clarified earlier information to the effect that the Council actually invited the Member of Parliament for Assin Central, Kennedy Agyapong, to the recent Asogli Te Za (Yam Festival).

In a statement dated Monday, September 12, the Secretary, Stephen Tetteh, indicated that it was rather the MP who requested an invitation to the festival.

He indicated that this request was not immediately approved because of the Council’s awareness of past ‘loose comments’ attributed to the outspoken MP.

“Honourable Mr. Kennedy Agyapong requested, through his representatives, for an invitation to attend some programmes of the 2022 Asogli Te Za (Yam Festival).

“The leadership of the Asogli State Council however disapproved of it because of several loose comments and utterances he had made which the Council viewed as unbecoming of an Honourable Member of Ghana’s Parliament,” he stated.

Stephen Tetteh also listed out a number of news headlines that go to support the above quote, further indicating that he takes full responsibility for the lapse that saw the invitation going out to the MP.

“In view of the above, I accept responsibility for the administrative lapse which resulted in the sending of an invitation letter to Mr. Agyapong. I apologize to both the Asogli State Council and Mr. Agyapong,” he stated.

Earlier, it had been reported that Kennedy Agyapong graced this year’s Te Za (Yam Festival) based on an invite from the Asogli State.

Under an official letterhead from the Asogli State Council, parts of the letter read: “The Agbogbomefia Togbe Afede XIV, Asogli State Council and the Festival Planning Committee have the pleasure to invite you to witness the Sitting-In State of Agbogbomefia Togbe Afede XIV on Friday September 9 and the climax of the festival which is the Grand Durbar on Saturday, September 10, 2027, at 10:00 am at Jubilee Park, Ho.”

The letter signed by the State Council and addressed to “Honourable Kennedy Ohene Agyapong” concluded: “We hope that you will make time out of your tight schedule to celebrate with us.”

This letter was also on the back of a report on Friday, September 9, 2022, that indicated that Togbe Afede XIV, the Agbogbomefia of the Asogli State, rejected some gifts presented by Kennedy Ohene Agyapong, MP, as part of his contribution to the people of the Asogli State who were celebrating the annual Yam Festival.

The MP had visited Ho to pay homage to the chiefs and people of the Asogli State.

But the gifts he sent, according to a graphic online reportage, were rejected at the durbar ground.

Some sub-chiefs, who served as intermediaries to receive the gift on behalf of Togbe Afede XIV, rejected the gifts and asked the MP to take them away.

A video depicting Mr Agyapong on the durbar grounds had some voices in the background shouting “away”.