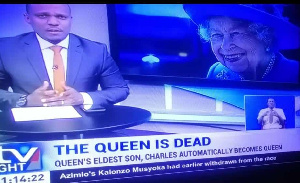 A leading TV channel in Kenya, NTV, has issued an apology for a caption error in relation to the news around the death of Queen Elizabeth II.

A screenshot of the gaffe has since gone viral across Africa with people making mockery of it. The apology was posted across their official social media handles on September 9.

“On Thursday night while covering the breaking news of the passing away of Her Majesty Queen Elizabeth II, we inadvertently wrote ‘Queen’ instead of ‘King’ in reference to the Prince of Wales, now King Charles III. We apologise for this error.”

The world’s longest-serving leader, Her Majesty Queen Elizabeth II, was pronounced dead on Thursday, September 8, 2022, via a statement from the royal family.

She became queen at the age of 25 and remained on the throne for seven decades before her death.

Queen Elizabeth’s eldest son Charles, 73, has been named successor and by that become the king of the United Kingdom and the head of state of 14 other realms including Australia, Canada and New Zealand. His wife Camilla becomes Queen Consort.