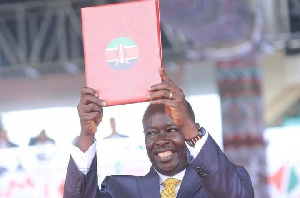 Kenyans have started gathering memes on their new Deputy President Rigathi Gachagua, hours after he took hi oath of office.

Gachagua and president William Ruto took their oaths of office on September 13, signifying the end of the Uhuru Kenyatta presidency and the start of the Ruto era.

The name Riggy G, Riggy for his first name Rigathi and G being the initial for his surname Gachagua trended during his inauguration for two major reasons.

Firstly, he had challenges repeating his oath of office at a point and also for his hard-hitting off-the-cuff speech at the event.

Incidentally, the origin of the name ‘Riggy G,’ has been traced to a Twitter user who in July first referred to him by the name.

Below are some tweets ‘baptizing’ the new Deputy President: