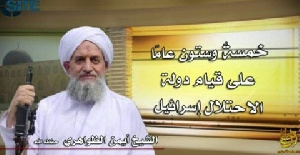 Justice has been delivered to victims of the September 11 attacks following the killing of Ayman Al Zawahiri, the known leader of al-Qaeda terrorist group.

The US government through President Joe Biden announced this week that al Zawahiri had been killed by two Hellfire missiles in a targeted operation in Afghanistan.

Biden, who was kept abreast of the strike against Zawahiri as he isolated with a rebound case of Covid-19, spoke outdoors Monday, August 1, from the Blue Room Balcony at the White House.

Zawahiri, Biden said, “was deeply involved in the planning of 9/11, one of the most responsible for the attacks that murdered 2,977 people on American soil. For decades, he was the mastermind of attacks against Americans.”

“Now, justice has been delivered and this terrorist leader is no more. People around the world no longer need to fear the vicious and determined killer,” he continued.

“The United States continues to demonstrate our resolve and our capacity to defend the American people against those who seek to do us harm. We make it clear again tonight, that no matter how long it takes, no matter where you hide, if you are a threat to our people, the United States will find you and take you out.”

The President said the precision strike targeting was the result of the “extraordinary persistence and skill” of the nation’s intelligence community.

“Our intelligence community located Zawahiri earlier this year — he moved to downtown Kabul to reunite with members of his immediate family,” Biden said.

The strike comes one year after Biden ordered the withdrawal of US troops from Afghanistan, prompting Taliban forces to rapidly seize control of the nation.

Biden said on Monday that when he withdrew US troops from the country, he “made the decision that after 20 years of war, the United States no longer needed thousands of boots on the ground in Afghanistan to protect America from terrorists who seek to do us harm, and I made a promise to the American people, that we continue to conduct effective counterterrorism operations in Afghanistan and beyond. We’ve done just that.”

Biden pledged that Zawahiri “will never again allow Afghanistan to become a terrorist safe haven, because he is gone and we’re going to make sure that nothing else happens.”

The President concluded by expressing gratitude to US intelligence and counterterrorism communities, saying that he hopes Zawahiri’s death will bring some measure of closure to the friends and families of 9/11 victims.

“To those who continue to seek to harm the United States, hear me now: We will always remain vigilant and we will act — and we will always do what is necessary to ensure the safety and security of Americans at home and around the globe,” he concluded.

Previous Nigerian government asks Italy to provide job for widow of its citizen beaten to death by Italian
Next VIDEO: Kisa Gbekle captured almost naked in a see-through net dress