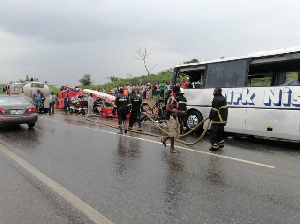 The National Road Safety Authority (NRSA) says it is taking appropriate steps to exert some control on the operations of commercial (passenger and freight) road transport organisations so as to help fight road accidents effectively.

Confirming that the death toll in last Tuesday’s road accident on the Cape Coast – Takoradi highway had reached 35 in a press statement issued on Wednesday evening [January 15, 2020], the NRSA said the steps it had initiated to help reduce road accidents include a vigorous sensitisation of the operators of the new mandate of the Authority.

In addition to that, the NRSA was training some 13,000 high-risk commercial drivers as well as the development of a Legislative Instrument (LI) for the regulation of road transport operations pursuant to the National Road Safety Authority Act, 2019 (Act 993).

Last Tuesday’s [January 14, 2020] accident involved two buses which crashed head-on at about 12:10 am at Dompoase near the Komenda Junction on the main Cape Coast – Takoradi highway in the Central Region.

Aside the 35 confirmed dead as of Wednesday morning, 25 cases of varying degrees of injuries were still on admission. 29 had been treated and discharged.

Preliminary investigations according to the NRSA had confirmed that the vehicles involved were public service transport vehicles operated by GPRTU from the Kaneshie and Takoradi (Accra) terminals.

Currently, the injured are receiving varied treatments at the Effia Nkwanta and the Cape Coast Teaching Hospitals.

The bodies of the 35 deceased victims comprising of 21 males, 11 females and 3 toddlers have been deposited at the Cape Coast Teaching Hospital morgue awaiting identification, autopsy and collection.

The NRSA said while it commiserates with the families of victims of the incident, the Authority has pursuant to its mandate commissioned a multi-disciplinary crash investigation into the crash to determine the contributory factors and institutional lapses that may have accounted for the crash. This among others will inform remedial actions and measures, it said.

“The Authority will wish to assure the motoring public that, it is taking appropriate steps to exert some control on the operations of commercial (passenger and freight) road transport organisations. These steps include a vigorous sensitization of the operators of the new mandate of the Authority, training of some 13,000 high-risk commercial drivers as well as the development of a Legislative Instrument for the regulation of road transport operations pursuant to the National Road Safety Authority Act, 2019 (Act 993),” it said.

“In the interim, the public is reminded that road safety is a way of life that can be achieved by observing basic safety precautions on speeding, wrongful overtaking, fatigue and distractive driving, while passengers are expected to assume frontline roles by speaking up against driver misbehaviour.