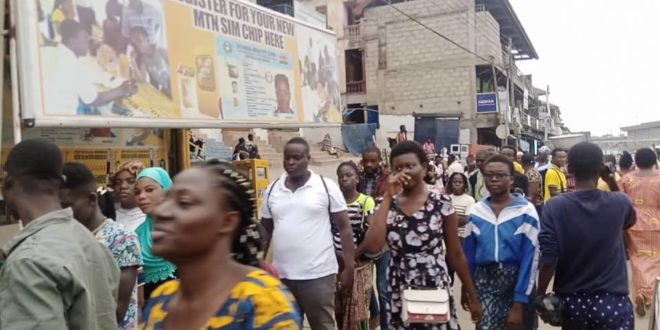 Offices of Mobile Network Providers across the Ashanti Region are recording heavy human traffic as people rush to get their sim cards re-registered.

The development follows the roll out of punitive measures by the National Communications Authority (NCA) where some mobile network subscribers have been barred from making calls.

OTEC News’ reporters during a visit to the Offices saw SIM Card users experiencing interruptions with their phone service, following the sanctions imposed by the NCA, walking to the offices to complete processes for their sim card registration.

The displeased users, who have been expressing their discomfort on social media, indicated that they are unable to make outgoing calls but can receive only incoming ones.

According to some, they received messages from their service providers that their SIM cards have been blocked ‘partially’ for two days due to their failure to re-register them using the Ghana Card.

The MTN Re-registration Kejetia in the Central Business District of Kumasi had the longest queue of applicants as at 5.30 a-m when OTEC News team visited.

Most of these people said they had already completed the first phase of the re-registration, which is self-service, and had thus come to the Centre to complete the second and last phase, involving capturing of their biometric data by the officials.

Confusion, anger and frustration were let loose at some offices, especially from subscribers who claimed to have been barred in error despite successfully linking their National Identification Numbers (NINs) to their Subscribers Identity Module (SIM) cards.

“I completed the linking and verification exercise as far back as three months ago, “but I was shocked this morning to discover that I cannot make calls.

This is my main line and imagines not being able to make calls. It is shocking!” One aggrieved subscriber said.

Some subscribers said they were stranded claiming that all efforts to get their sim cards re-registered had proven futile due to their service provider’s inability to attend to them.