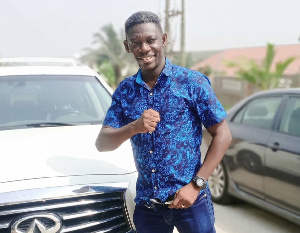 There was a misunderstanding between Agya Koo and Frank Fiifi Gharbin after the shooting of the controversial Okomfo Anokye movie produced by Paul Gee Movie production.

It would be recalled that Agya Koo revealed on Kumasi-based Angel Fm Drive Time show hosted by Ike De Unpredictable and monitored by MyNewsGh.com that, Director Frank Fiifi Gharbin wanted him (Agya Koo) to go naked and shoot a scene in the Okomfo Anokye movie but he refused to do that after consultation with some elders at Manhyia Palace.

Agya Koo explained that Directors and Producers in the Kumawood Movie Industry plotted against him and sidelined him from lead movie roles after refusing to go naked in the said movie.

Frank Fiifi Gharbin speaking on Angel Fm Entertainment Show hosted by Ike De Unpredictable said “Ike, I’m not here to explain issues or defend myself. Agya Koo is my elder brother so I have to humble myself and accept my mistakes”

“After what happened between me and my brother Agya Koo, people including some directors and producers have made several attempts to resolve the issue but I think this is the right time to apologize to Agya Koo” Frank Fiifi Gharbin said on live radio.

“Anything that happened during the shooting of Okomfo Anokye Movie, I accept the blame because I directed the movie. I will not blame anyone but all that I want to tell my brother Agya Koo is to forgive me so that we can work as a team to strengthen the pillars of the Kumawood Movie Industry,” he added.

“On behalf of FIPAG PRO Mawule Ekpe Peter Abro, Ike De Unpredictable, Amandzeba, Dr Kwaku Oteng and crew members who helped the shooting of Okomfo Anokye Movie Industry, I want my brother Agya Koo to forgive me and see me as his younger brother”

“We need teamwork, love and unity to revive Kumawood Movie Industry because Ghanaians are calling for us and we cannot disappoint them,” he added.