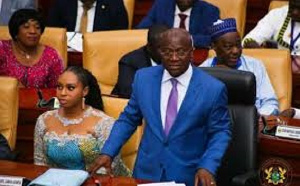 Majority Leader Osei Kyei-Mensah-Bonsu has bemoaned the embarrassing manner in which the Speaker of Parliament Alban Sumana Kingsford Bagbin ordered Finance Minister Ken Ofori -Atta out of the parliamentary chamber.

He likens it to an order given to a lamb stating that under the standing orders, the finance minister is a member of the house though without voting rights.

Osei Kyei-Mensah-Bonsu on Friday night moved the application on behalf of Ken Ofori-Atta to afford him the chance to address concerns of the minority on imposition of taxes such as the E-Levy in order to secure consensus.

But the Speaker rejected the application from Finance Minister Ken Ofori-Atta to be afforded the opportunity to engage the leadership of both majority and minority members of the House ahead of the conclusion of debate on the 2022 budget and economic policy of the government.

Speaking to the development, the Minister of Parliamentary affairs wondered why in addition to his rejected application, was thrown out.

“The Minister is sitting in the plenary not in the gallery then we have people in galleries he is not clearing them including the General Secretary of his party the National Democratic Congress (NDC) Mr. Johnson Asiedu Nketia. That person must not be ejected or appealed to; it is the Minister of Finance who should be ordered out like a lamb. I think that this is unbecoming of a speaker and we cannot tolerate this any longer. He is not a speaker of one side of the house. From now one we are going to signal the speaker we will not tolerate it any longer”, he warned.

Parliament is bloated, we can do with maximum 200 MPs – Kyei-Mensah-Bonsu