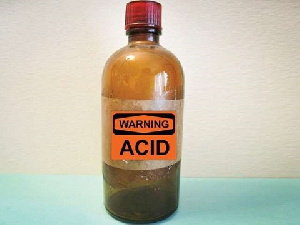 A 30-year-old woman with two children, Comfort Tawiah, has been bathed with acid by her jealous boyfriend at Bawjiase in the Awutu Senya west district of the Central Region.

The lady is said to have lost her sight as a result of the incident.

Information available to Atinkaonline.com indicates that an argument ensued between the two when the suspect, Ishmael Atsitso, visited the victim a day before.

The victim, who narrated the incident to pressmen revealed that the suspect poured the acid on her in her sleep after the argument.

She said they had been arguing over who should take the responsibility of taking care of their son after their failed relationship.

Mother of the victim, Helina Mensah, who could not control her tears pleaded with the police to ensure that justice is served.

Meanwhile, the suspect has absconded since the incident.