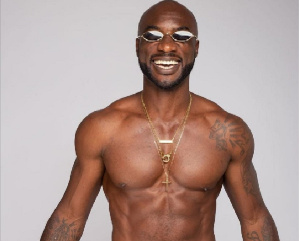 Halfway through his performance at the ‘Night of Love’ concert, Kwabena Kwabena, wasn’t spared by some teeming female fans in the crowd.

The highlife singer, who was standing at the edge of the stage during his performance, was swamped and dragged forward by some ladies and one of them got hold of him by his shirt buttons.

With her hands moving through his chest, the lady gradually unbuttoned Kwabena Kwabena’s red long-sleeved shirt and began twisting his nipples in a video making rounds on the internet.

Another lady spanked him on the butt and the ‘Tuemuda’ hitmaker who was seemingly enjoying all that was happening, maintained his position at that particular spot whiles beaming with smiles.

He then completely took off his shirt and performed the rest of his songs.

Kwabena Kwabena is said to have held his ‘Night of Love’ concert at the Eastern Premier Hotel in Koforidua on Valentine’s Day February 14, 2022.