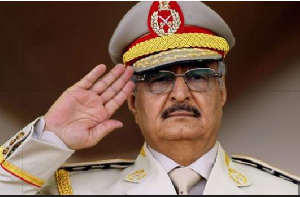 A top Libyan military commander whose forces control the country’s eastern regions on Friday endorsed the reopening of the coastal highway along the Mediterranean Sea linking Libya’s long-divided east and west.

East-based military commander Khalifa Haftar said the Libyan Arab Armed Forces General Command were working towards a “just and comprehensive peace… with all sincerity and honesty”.

The highway has been closed since April 2019 when Haftar, launched a military offensive to capture Tripoli from the United Nations-recognised government.

The resumption of traffic along the artery would be a significant step toward unifying Libya’s warring sides.

The 1,800 kilometer (1,125 mile) -long highway links the capital of Tripoli to the west with the city of Benghazi to the east.

Haftar’s campaign ultimately failed in June 2020, after which U.N.-sponsored peace talks brought about a cease-fire and installed an interim government that’s expected to lead the country into general elections in December.

The same deal inked in October also stipulated that all foreign forces and mercenaries – which support different sides in the conflict – withdraw from Libya in three months, a provision that has not been met.

In June, Libya’s interim authorities had announced the reopening of the road and held a ceremony near Tripoli where Prime Minister Abdul Hamid Dbeibah was filmed while riding a bulldozer to tow away roadblocks.

However, it remained unclear whether the road would become fully functional amid objections to the reopening by militias that control parts of it.

The reopening was a long-held demand by the U.N. to enable the safe passage of civilians and goods.

Haftar’s endorsement came shortly after a U.N.-backed joint military committee representing the warring factions announced the road would reopen on Friday morning and that a subsidiary committee would be in charge of securing it.

In a televised speech, Haftar congratulated the Libyan people on “this achievement,” but also cautioned that peace will not be possible “unless all foreign forces and mercenaries leave the Libyan territories unconditionally”.

He urged the international community to double its efforts to achieve this end.

Libya has been wracked by chaos since a NATO-backed uprising toppled longtime dictator Moammar Gadhafi in 2011, and split the North African country between a U.N.-supported government in Tripoli and rival authorities loyal to Haftar in the east, each backed by different armed groups and foreign governments.