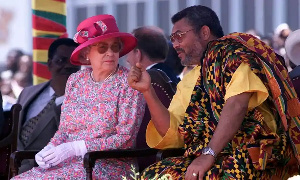 Social media is often the best avenue to test the pulse of a topical issue online, often times even offline.

So, it was for good reason that the global trends as at September 8, 2022; included among others, #QueenElizabeth, Rest In Peace, London Bridge etc. Queen Elizabeth II had died.

The world’s longest serving leader, was pronounced dead on Thursday, September 8, 2022, via a statement from the royal family.

But localized trends in Ghana aside the global ones had ‘Maa Lizzy’ also as a top trend. It turns out that, this was how social media users were celebrating the life and mourning the passing of the Queen.

Most Ghanaians posted funny tweets about how they are marking the passing, whiles others also took to serving historical material of Queen Elizabeth’s direct interaction with Ghana – visits in 1961 and 1999; as well as times when Ghanaian leaders had met her at the Buckingham Palace.

Find below some of the tweets:

About the late Queen

She became queen at the age of 26 and remained on the throne for seven decades before her death.

Queen Elizabeth’s eldest son Charles, 73, has been named succesor and by that becomes king of the United Kingdom and the head of state of 14 other realms including Australia, Canada and New Zealand. His wife Camilla becomes Queen Consort.

Previous Doctor injects taxi driver to death
Next Nigerian gives birth at 33,000ft on flight from Turkey to the UK