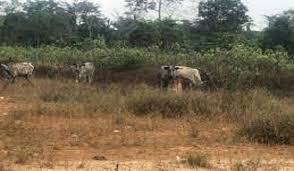 The New Edubiase Sports Stadium in the Ashanti Region has turned into a grazing ground for cattle and other animals since it has been abandoned for several years.

The then President John Dramani Mahama cut sod for the construction of the state-of-the-art New Edubiase Sports Stadium in 2015.

However, the stadium which is said to be 40% complete has been abandoned and has also become a haven for criminals in the community where it is sited.

A journalist, Osei Kwadwo, who visited the stadium reports that “SHAKDEEN Limited constructed a wall and a dressing room on the site but due to financial constraints had to leave the project hanging.”

Former Deputy Minister of Sports under the erstwhile John Dramani Mahama administration, Joseph Yamin, speaking in an interview with Osei Kwadwo on Ambassador TV on YouTube on the state of the stadium, expressed worry over the fact that work had stalled on the stadium.

He indicated that prior to leaving office, the John Dramani Mahama led administration secured funding for the stadium because it was part of the fringe benefits of the construction of the cocoa roads.

He said if the Nana Addo Dankwa Akufo-Addo led government hadn’t ended the cocoa roads contract, work on the stadium would have been completed.

“The New Edubiase Sports Stadium project was part of the Cocoa Roads contract and it was financed by Cocoa Board. NDC administration led by John Dramani Mahama secured funds for the project before cutting the sod for the construction of the project but the sad aspect is the project has been abandoned for so many years,” Yamin said.

He continued that, “the termination of Cocoa Roads contract by Nana Addo’s government is the major cause of the project abandoned.”

Joseph Yamin used the opportunity to assure the people of New Edubiase especially that the next John Dramani Mahama administration will deal with the shortfalls.

Meanwhile, the finance minister, while presenting the 2022 budget, indicated that work will begin on the New Edubiase Sports Stadium in 2022.

He said the suspension of work on the stadium was due to financial constraints but the government is now prepared to resume work.