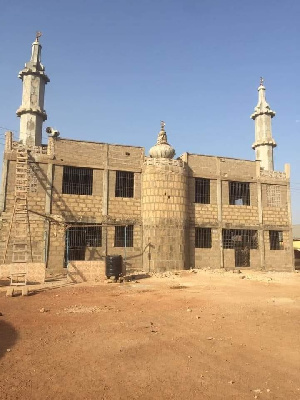 Majeed Waris builds a mosque in Tamale, his hometown

Ghanaian striker, Majeed Abdul Waris, is reported to be building a mosque in his hometown, Tamale, Northern Region.

The mosque which occupies a vast land that is nearing completion is reported to be fully funded by the former Black Stars player.

According to Sheikh Tophic, the benevolent act by Majeed Waris is a demonstration of Prophet Mohammed’s words which says, “Whoever builds a mosque for Allah, Allah will build for him a house in heaven.”

The striker has made 14 appearances in the Ligue Un so far and has two goals to his credit.

Waris made his debut for the Black Stars in 2012 at age 20 and has since gone ahead to make over 30 appearances scoring 4 goals.

Despite not featuring at any AFCON tournament, the player was part of the Black Stars team at the 2014 World Cup in Brazil.

Tags A builds HIS HOMETOWN IN Majeed MOSQUE Tamale WARIS