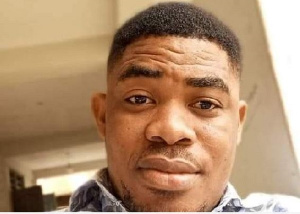 Man accused of beating his girlfriend to death remanded into custody

Philip Kumah, the man initially reported as a Deputy Director of the Youth Employment Authority in the Akatsi North District has been remanded into Police custody by the Ho District Court 1 for allegedly beating his girlfriend to death.

Elizabeth Yesutor died at the Ho Teaching Hospital on Monday, March 8, 2021, after she reported to the hospital with injuries that suggested she had been abused.

According to the Volta Regional Police PRO, Sgt. Prince Dogbatse, the deceased had on multiple occasions reported being abused by the suspect but withdrew an earlier case against the boyfriend when she received medical attention.

Robert Addo, the Presiding judge sitting on the case said that the facts before him do not strongly link the accused to the death of Elizabeth and thus gave the Prosecution time to further investigate and gather more facts on the matter.

The case has therefore been adjourned to Thursday, March 25, 2021.

The YEA had earlier denied media reports associating the suspect to the Authority.

In the statement the Authority said “…the suspect Philip Caesar Kumah was a staff engaged on contract to aid in our Monitoring and Evaluation activities in the Akatsi South District (Not Akatsi North)…his contract has expired and is under review and consideration for renewal.”

Tags accused BEATING DEATH GIRLFRIEND HIS man OF REMANDED to