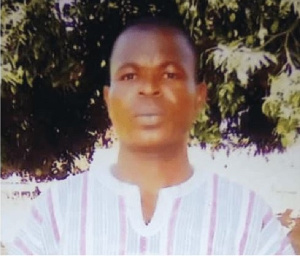 Man assaults wife with axe for denying him sex

A man in Northern Ghana is facing court after he allegedly assaulted his wife with an axe when she denied him sex.

Victus Kuudiyiri, 35, a security man had lived with the victim in Wa, the capital of the Upper West region, about 695km from the capital, Accra.

The suspect has since been remanded into prison custody, while the victim [name withheld] is battling life-threatening wounds at the Komfo Anokye Teaching Hospital (KATH) in Kumasi.

State-owned newspaper, the Daily Graphic stated that the suspect, has been charged with attempted murder and the docket on the case forwarded to the Attorney-General’s Department for advice.

Kuudiyiri, whose plea was not taken when he appeared before the Wa Magistrate Court, presided over by Mr Sydney Braimah, will reappear on May 20, this year.

According to the prosecutor, Sergeant Ali Katebor, Kuudiyiri, who did not like the idea of his wife denying him sex, locked her up for several hours in their apartment on May 1, this year.

He said not satisfied with that act, Kuudiyiri again picked up a quarrel with the wife, and when a misunderstanding ensued between them, he picked up an axe and violently hit the victim’s head with it.

He said the woman fell down unconscious, and realising what he had done, Kuudiyiri took to his heels.

Sergeant Katebor said the couple’s 10-year-old son, who witnessed the act, picked up her mother’s mobile phone and called her aunt, who went to the scene and rushed the unconscious victim to the Wa Government Hospital.

He said because of the gravity of the injury, she was rushed to KATH.

According to the prosecutor, three days later, Kuudiyiri reported himself to the Wa Police and was consequently arrested.

He was arraigned before the Wa Magistrate Court and charged with the offence of attempted murder and remanded, pending further investigations.

Meanwhile, the Upper West Regional Police Commander, Deputy Commissioner of Police (DCOP) Mr Francis Aboagye Nyarko, has cautioned aggrieved people not to take the law into their own hands under any circumstance but report any misunderstanding to the police.

Ghanaian women face barriers in reporting violence. These obstacles are rooted in a cultural belief that domestic and sexual violence is a private matter that should be addressed outside of the criminal justice system.

A public health report shows that 33 to 37 percent of women in Ghana have experienced intimate partner violence in the course of their relationship (this includes physical, sexual, and emotional violence.

Previous Akufo-Addo jabs Mahama over management of coronavirus
Next Coronavirus: How ‘secret burials’ in South Africa could help tackle Covid-19