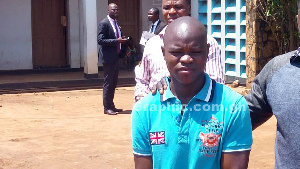 A seven-member jury panel has been constituted for the commencement of the case involving Lucas Agboyie, the man accused to have murdered a seven-year-old girl at Ashaiman in 2015.

The girl was said to have passed by a metal container where Agboyie resided and he abducted and killed her.

It was the case of the prosecution that, on April 19, 2015, the seven-year-old girl was sent by her mother with a GH¢20 note to buy bread but never returned.

The naked body of the girl was found lying supine on an old student’s mattress, with blood oozing from her mouth and nostrils in Agboyie’s metal container.

He has pleaded not guilty for the charge of Murder and has been remanded in prisons custody.

In court on Tuesday, December 14, 2021, it was a straightforward process as the jurors were empaneled without any rejection.

They have since been sworn-in for the trial to commence.

EIB Network’s Court Correspondent Murtala Inusah reports that, the court presided over by Justice El-Freda Dankyi has adjourned the case to January 12 for the parties to address the jury.

The Prosecution was led by Mrs. Francisca Tete-Mensah, a Senior State Attorney while the defence was represented by Sani Rashid.

Before the accused person was committed for proceeding to the High Court, Agboyie, aka Sympathy, had confessed to killing the seven-year-old, after which he had sex with her corpse, to the District Court in September 2016.

On November 25, 2018, Agboyie’s counsel from the Legal Aid Scheme, Mr. Eric Opoku, then filed an application seeking for an order for a psychiatric examination to be conducted on his client.

Counsel submitted that he was unable to have meaningful interactions with his client in order to mount any sort of defence for him.

On February 25, 2019, Mr. Opoku moved the application, which was subsequently granted by the court.

Consequently, Mr. Justice Baiden ordered the Chief Psychiatrist to conduct a psychiatric examination on the accused to ascertain whether or not he was mentally fit to stand trial.

The court directed the investigator in the case, Detective Inspector Simon Apiosornu, to ensure that the orders of the court were carried out.