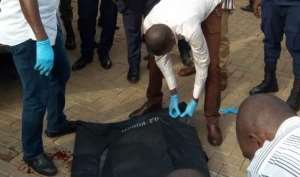 Man found dead, wrapped in plastic under bridge at Ho

An unidentified man has been found dead under a bridge near University of Health and Allied Sciences in the Ho Municipality.

The man was found wrapped in black polythene and tied with a sellotape.

According to sources, the body of the man was believed to have been dumped under the bridge by unknown assailants.

Speaking to Citi News, Assembly woman for the Loboli Electoral Area, Martha Gatolagble, said they are working closely with the police to find the identity of the deceased person and the assailants.

Similarly, another person believed to be in his late 40’s was found dead near the GetFund hostel of the Ho Technical University on Thursday.

The deceased, identified as Samuel Addo, was a native of Adaklu Kojobi near Ho, according to the Assemblyman for the Bosontoe Electoral Area, Sefadzi Agama.

“So far we have not heard anything from the police, and we are waiting to hear from them,” he said to Citi News.