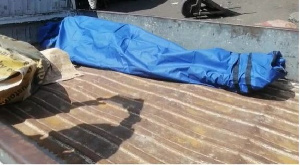 A man believed to be in his late 50’s has been allegedly beaten to death and dumped behind Kasoa Odupong Kpehe school building in the Awutu Senya East Municipality of the Central Region.

The deceased was seen by traders lying lifeless on the floor Tuesday morning and died shortly after he was given food and water but refused to take in anything.

It is believed the deceased who was yet to be identified at the time of filing the story was assaulted somewhere and dumped behind the school block.

The Awutu Senya East Director of the Municipal National Disaster Management Organisation(NADMO), Kwame Amoah, believes the man who was foaming at the mouth died due to internal bleeding.

Police officers from the Kasoa District Police command conveyed the body to the Police Hospital morgue while investigations have commenced into the incident.

The NADMO Director appealed to the people of Kasoa to temper justice with mercy and condemned the high rate of instance justice in the Awutu Senya East Municipality and its environs.