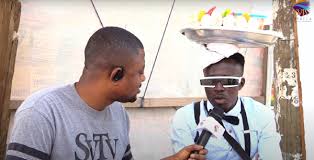 Traffic hawker, Collins Gyama has indicated that one of the saddest moments of his life occurred at a church where he visited to sell boiled eggs and pepper.

According to Collins, he was sacked off the premises and this brought years to eyes. Immediately, he returned home with all his goods feeling miserable and sad.

Speaking with DJ Nyaami on SVTV Africa, Collins indicated that in trying to find his daily bread he visited a church and the reception was unforgettable.

“When they saw me carrying the eggs, they sacked me because they said they do not sell there. I was very sad because I thought going to the church would rather help. I cried and went home with all the eggs. I couldn’t sell any,” he recounted.

Being the first of seven children, Collins migrated from his hometown in the Western North region to the capital city for a better job. However, life in Accra has not been easy for the young chap.

As a result, he decided to venture into a business rather than work for 300 Cedis monthly. Also, from his little income, he supports his younger brother who is studying in a technical school.

“I wanted something that men are not known for. I realised there are not many men selling boiled eggs, that is why I decided to join the business,” he said.

Collins is a licensed driver who and appreciate help from a car owner to register it for ride-hailing service.