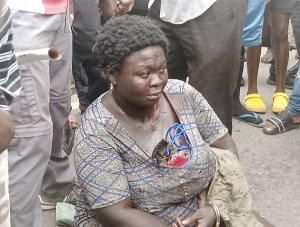 The officer-in-charge of the Kwame Nkrumah Water Gardens, Emmanuel Kwasi Afful, says the young man stoned to death by a mentally-challenged woman, had claimed that the said woman was his mother.

This comes after news broke that a young man, identified as Kwabena Amoani, was stoned to death at the Kwame Nkrumah Circle.

Mr. Kwasi Afful, narrating the sequence of events that led to Kwabena Amoani’s death, said that a man ran into their yard on Monday seeking protection.

He said that the woman came in after the man, wielding a stone to attack him.

“After we managed to rescue him from the mentally-challenged woman, another young man came into our corridor and told us that the said woman is his mother and he wants to take her away. He was in a pair of trousers and a stripped shirt.

“… we advised him to get about five more people to assist him restrain the woman since he can’t do that alone. By then we had managed to drive the woman away,” Mr Afful said.

According to Mr. Afful, the man claiming to be the son of the woman trailed the woman for some time only for them to later hear that he was dead.

“The young man [in a stripped T-shirt] followed the mother to the MTN office around Paloma and returned. As to what happened that led to his death, I don’t know,” he said on Angel FM’s Anopa Bofo Morning Show.

Emmanuel Afful, however, suggested that if the police or national security are contacted they can tell what happened if the CCTVs within the area are reviewed.

He, however, refuted the claim that the deceased was an okada rider since the scene of the incident was not the okada station.

Meanwhile, the Communications Director for the Mental Health Authority, Dr. Kweku Brobbey, has suggested that the woman must be brought to the psychiatric hospital to check if indeed she is mentally challenged or otherwise.

She can even be assessed at the Police Hospital, he said.

“It is the responsibility of the District and Municipal Assemblies to help remove persons with mental disabilities, who pose a risk to themselves and the public from the streets. It is not our mandate to go round taking them off from the public domain but if they notify us, we can send our personnel to accompany them to get them off in a dignified manner. Ours is to cater for them when they are brought in based on resources we receive from government,” Dr. Brobbey said.