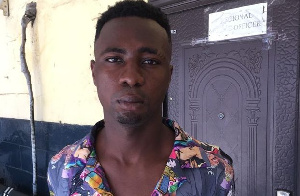 A Circuit court in Accra has granted bail to a 22-year-old scrap dealer, Osman Amadu who sprayed a liquid substance into the eyes of a policewoman at Zongo Junction in Accra while the policewoman was enquiring about his movement in the sum of GHC50,000.

In addition to the bail sum, the accused person is to provide two sureties, all of whom must be justified and be persons living within the jurisdiction of the court.

The court presided over by Her Honour Afia Owusua Appiah clarified that the sureties should be persons who can afford to pay the GHc50, 000 in cash should the accused person run away.

He was also to report to the case investigator once every week till the case is over.

In court on Wednesday, April 29, when case was called for Case Management Conference (CMC), the court observed that witness statements of the prosecution were not served on time.

He is facing two charges, to wit; failure to comply with the restriction orders imposed by the President and causing harm before the court presided over by Her Honour Afia Owusuaa Appiah

He pleaded not guilty to both charges. Case has been adjourned to May 27, 2020 for CMC.

The brief facts as presented to the court by Chief Inspector Guilliver Tenkorang were that the complainant, Bernice Osei Owusu, is a policewoman stationed at the Kaneshie Police Divisional headquarters while Amadu is a scrap dealer and a resident of Russia, a suburb of Dansoman in Accra.

He said “on Friday, April 10, 2020, at about 9:00 a.m., the policewoman was on a COVID-19 duty at the Zongo junction, near Great Lamptey Mills School, ensuring compliance of directives.”

“In the course of the duty, a taxi-cab with the accused on board was stopped. He was questioned about his movement but he became furious and, without any provocation, sprayed a liquid substance from a small plastic bottle into the eyes of the policewoman,” prosceutor Chief Inspector Tenkorang told the court.

The prosecutor said as a result of the action of the accused, the complainant sustained servere injuries to both eyes, per the report of the medical officer who treated her.

He said further investigation “showed that the accused was roaming aimlessly, contrary to the directives of the President.

According to the police, the suspect was arrested after the police officer shouted for help

Amadu told the police he “didn’t know what came over him.”

The prosecution was earlier ordered by the court to serve the accused person and his lawyer, by way of disclosure and within 10 days, all documents it intended to rely on.

The accused person has been remanded in police custody to re-appear before the court on April 29, 2020 for Case Management Conference to be considered.

He prayed the court to, instead, make an order for the registrar of the court to take possession of the alleged substance and take to the forensic laboratory for testing.

Even though prosecution did not opposed that move, Chief Inspector Tenkorang pointed out to the court that the substance was brought to the court sealed.

He explained that, it was sealed in the presence of the accused person and an independent witness.

He also informed the court that the accused person signed to confirm that it was the same substance that was brought to the court.

The court, in its ruling, subsequently asked the registrar of the court to take possession of the forensic laboratory process and both parties have been urged to be involved at all points until the result is brought to the court.