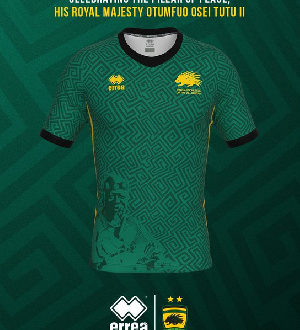 Manhyia has directed Asante Kotoko management, led by Nana Yaw Amponsah, to remove the imprinted image of the King of the Ashanti Kingdom from the club’s new 2022/23 jersey, according to Kessben Media.

The club unveiled their new jersey for the upcoming season, with the image of the club’s sole shareholder, Otumfour, prominently displayed on the side of the jersey.

There have been many commentaries on whether it is appropriate to use the King’s image on the jersey.

“It’s uncivilized to have put Otumfuo on the Kotoko jersey. In fact, it’s a village thing. Otumfuo is more than that,” he said on Kessben FM.

“Which team does this in the world? We put sponsors on jerseys. This is not maturity, they’ve already done it but they can go back and change,”

Dr. Randy Abbey on the other hand said all talks about Kotoko using the King’s image on the jersey are unnecessary.

“Obviously, I think that they are using the image and the influence of Otumfour to of course drive fundraising. Am sure that it is the big thing,” Dr. Randy Abbey stated.

“The feature alone can drive a lot of people even probably non-Kotoko supporters who admire the king and the royalties of Manhyia,”

“It could drive sales all across the world. Am sure that they planned to use the image and influence of Otumfour to drive sales and raise funds for the club,” he added.

“Am also sure that it is something that can raise a lot of money and Otumfour himself will not go and look for money to support the team. We know there are many times that he’s been called on board upon to look for resources to support the team and all that,”

“I think that it is innovative once they have the fundamental thing of seeking the concent of Otumfour and Manhyia showing them the design. All talks about it are unnecessary. I think they should really focus on how we all can be innovative in our new way and new thinking in terms of how we are running football,” he ended.

Previous Boy, 2, killed and dumped into public toilet at Twifu Aboabo
Next Japanese romance scammer arrested in Ghana; set to be removed