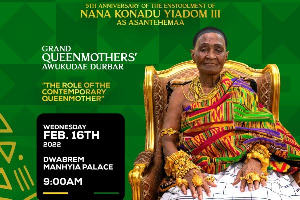 It was a festival of tradition, culture and costume as a sea of people gathered at the Manhyia Palace in Kumasi to celebrate Awukudae with the Asantehemaa, Nana Konadu Yiadom III.

The ceremony, which was attended by the Vice President, Dr. Mahamudu Bawumia, and the First and Second Ladies, coincided with the 5th anniversary of the enstoolment of the Asantehemaa.

The Queenmother, who sat in state together with Otumfuo Osei-Tutu II, the Asantehene, to receive visitors, entered the durbar ground in a palanquin adorned in exquisite handwoven Kente.

Her entry was announced with rich traditional displays by her entourage who fired traditional guns to announce her arrival.
It was a similar display that preceded the arrival of the Asantehene; however, he was not carried in a palanquin.

The costumes of the various Queenmothers, who graced the occasion, were also a sight to behold as they portrayed the Asante culture with finesse.

As they arrived one after the other, the celebrants could not help but admire their beauty and thus showered praises on them.

Some of the royals danced to the tunes of the cultural groups that had positioned themselves to welcome them with traditional songs.

The GNA observed that most of the invited guests were dressed in traditional attires to suit the occasion, adding a lot of colour and fun to the celebration.
Mrs. Rebecca Akufo-Addo and Samira Bawumia looked splendid in their traditional fashion as they arrived in their beautiful Kente clothing.

The celebrants were entertained by the traditional performances that filled the occasion.

“The atmosphere at the Manhyia Palace was, to say the least, an epitome of Asante culture and tradition,” a celebrant told the Ghana News Agency, as he beamed.