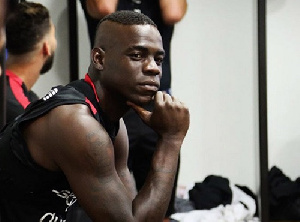 Italian striker of Ghanaian descent Mario Balotelli has admitted to making some mistakes that cost him a better career than he has had so far.

Balotelli concedes that there were some errors in judgement on his part and that is what blocked him from having a hugely successful career.

Balloteli said that leaving Manchester City is the biggest mistake of his career and he now believes he should have stayed with the Premier League champions.

“I think that was my biggest mistake, to leave City. Even in the year when I left, I played very well in Milan for a year and a half, but after that, I had some problems,”.

Balotelli also opened up on winning the Premier League with Manchester City in the 2011/2012 season.

He stated that the feeling of winning the League outweighs the Champions League success he chalked with Jose Mourinho’s Inter Milan, a season prior.

The 31-year-old Italian also said that he could have had a career similar to Messi and Ronaldo but for some chances he missed in his game.

At City, Balotelli won the league with Mancini’s side but left in 2013.

Balotelli enjoyed a brilliant start to his career, winning three Serie A titles and the Champions League with Inter Milan before moving to Manchester City.

Balotelli is now playing for Adana Demirspor in the Turkish Super Lig, where he has 10 goals and three assists in 22 appearances this season.