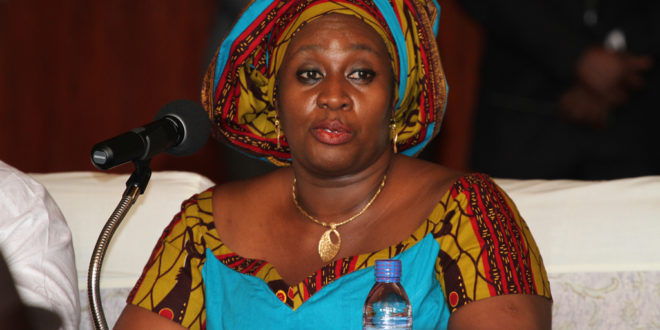 The High Court in Accra presided over by Her Ladyship Justice Afia Serwah Asare-Botwe has said it will not hear the application for trial in absentia of Ex-MALOC Chief Executive Officer (CEO) Sedina Christine Tamakloe Ationu until the two sureties appear before the court.

The court said, before it will consider the motion for her to be tried in absentia, the motion for forfeiture where the sureties are to appear before the court to explain the whereabouts of the 1st Accused is dealt with first.

The former CEO of MASLOC has since October 10, 2021 has been absent from the trial after she was granted permission to seek medical examination out of the country.

At the last court sitting, the state indicated to the court that, it had filed a fresh forfeiture motion against the two sureties who signed the bail bond for her.

However in court on Monday, May 9, 2022, Stella Ohene Appiah, a Principal State Attorney told the court that, even though the sureties are aware of the Forfeiture application, “technically, they have not been served.”

She therefore prayed for a two-week adjournment to enable the prosecution serve the sureties, one of them is said to have relocated to the Volta Region but “is not comfortable with EOCO investigator” knowing his new place of abode.

Just when the court was about to adjourned the case, the Principal State Attorney reminded the court about their application for her trial in absentia.

Justice Afia Serwah therefore said, until the forfeiture application is heard, he will not consider the application for the Ex-MASLOC CEO trial in absentia.

On April 25, State prosecutors indicated they have filed a fresh application which sought to haul the two sureties who satisfied the bail conditions of the former Chief Executive Officer (CEO) of Microfinance and Small Loans Centre (MASLOC) Sedinam Tamakloe Attionu over her continuous absence from the trial.

The moved followed a similar application which was earlier withdrawn on March 28 by the prosecution due to procedural challenges.

Sedina Tamakloe was on February 14, 2019 granted bail in the sum of GHc5 million with two sureties by the court, presided over by Mrs Justice Afia Serwah Asare-Botwe.

This was after she pleaded not guilty to 78 counts of causing financial loss to the state, stealing, contravention of the public procurement act, among other charges.

She has since last year October been absent from court sitings after she was said to have travelled out of the country for medical examination.

On April 25, the prosecution led by Stella Ohene Appiah, a Principal State Attorney said, “We have filed a new application for forfeiture.”

She however told the court that, they have not been able to serve it on the sureties.

The forfeiture processes are to compel the sureties to come to the court and explain why they should not pay the GHc5m bail sum to the state.

The judge, Justice Asare-Botwe, has subsequently adjourned the case to May 9, 2022.

Daniel Axim, a former operations Manager of MASLOC is the second accused person and was present in court.

The former MASLOC CEO and Mr. Axim have been dragged to court for allegedly stealing, causing financial loss to the state to the tune of GH¢93 million, among other charges.

Together, the two are facing 78 counts of charges including conspiracy to steal, stealing, unauthorised commitment, resulting in a financial obligation for the government, improper payment, money laundering and contravention of the Public Procurement Act.

The two accused persons allegedly stole a total amount of GH¢3,198,280 whiles at MASLOC and willfully caused a GH¢1,973,780 financial loss to the State.

Again, Ms. Attionu and her accomplice while in charge of MASLOC allegedly made unauthorized commitments resulting in financial obligations for the government to the tune of GH¢61,735,832.50.

Previous I was paid to step down for Wontumi in 2018 – NPP Regional Chairman aspirant
Next From Sulley to Kevin: Five veteran players who could join Ghana’s squad for World Cup