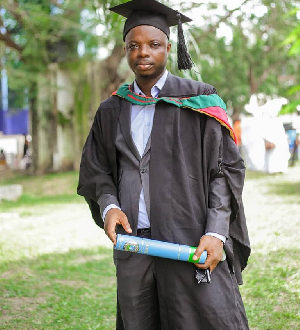 In the Ghanaian political space, Kwame Baffoe has carved a niche for himself as an unvarnished political animal.

Abronye as he is popularly referred to has over the years showed no relent in defending the New Patriotic Party.

In the ranks of the party, he has stamped his dominance by rising to become the Bono Regional Vice Chairman and going on to win the regional chairmanship for two consecutive terms.

While his political life has been known to the public, there is relatively little known about Abronye’s educational background as he involves himself more in the organization of the party.

However, GhanaWeb has come across details of Abronye’s academic qualifications which shows what some have described as an impressive dedication to knowledge acquisition as he seems to have quite a good number of certificates under his belt.

Abronye’s latest academic acquisition is a Masters Degree in Energy Economics from the Ghana Institute of Management and Public Administration.

Before his graduation from GIMPA, Abronye had under his belt a Chartered Energy Economist certificate from the Global Academy of Finance and Management in the United States of America.

The NPP regional chairman also holds a Bachelor of Laws from GIMPA and is also a Certified Financial Crimes And Fraud Prevention (CFCFP) expert with certification from the Global Academy of Finance and Management, USA.

Abronye graduated from Kaaf University College for his LLB, the school is affiliated with GIMPA

Abronye is currently pursuing a Professional Law Course at the University of Sydney in Australia.