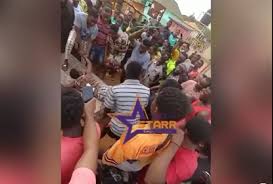 Dozens look on as accused ‘mate’ is subjected to lashes

A bus conductor accused of stealing a driver’s phone has been subjected to bouts of lashes as punishment.

A video of the incident which is reported to have occurred at Appolonia in Accra is going viral on social media.

In the said video sighted by GhanaWeb, the alleged phone thief is seen laid on a table and is held by his legs and hands by some men while his punishers unleashed dozens of strokes of the cane on his backside.

Amidst his cries for mercy, some of the eyewitnesses gathered to observe the incident are heard making sympathising comments while others shouted their disdain about the victim’s alleged act of theft.

Read more: 44 villages in Drobo State support the Anti-LGBTQI+ Bill, warns MP not to vote against it

Meanwhile, journalist, Nana Aba Anamoah through her social media page has sought to draw the attention of the Ghana Police Service to the act which some see to be extrajudicial.

Source: www.ghanaweb.com
Related Topics:accusedrivermatephoneSTEALING
Up Next