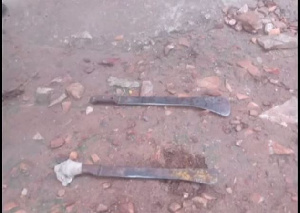 A man reported to be mentally challenged has attacked two men with a machete at Anyaa NIC in the Greater Accra Region.

The man identified as Mawuko, who lives in a structure in the area, is said to have constantly been threatening to kill residents in the area.

According to a UTV report, the man, aside from his usual threats, is known for slaughtering livestock in the area.

It was during one of his attempts to slaughter a fowl that the owner chanced upon him and tried to stop him.

According to the report, the mentally unstable man lifted his machete in the process to hit his head, but the victim tried blocking him with his hand, which led to the cutting off of the smaller finger.

A brother of the victim also, in an attempt to rescue his brother, was also slashed with the machete.

The report further noted that the owner of the area where the mentally challenged man seems to have erected a structure to reside in denied granting permission to same.

He, however, explained that he had reported the issue to the police, but the police have since said it was not their duty to vacate the mentally challenged man from where he resides.