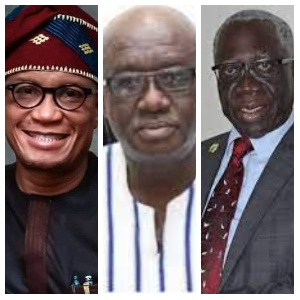 Following the transition of the New Patriotic Party for their second term in governance, President Nana Addo Dankwa Akufo-Addo had to choose persons he deemed fit to join his administration for the 4-year period.

This decision involved downsizing his already existing government and making provision for some new ministries with different functions.

An initial figure of 126 was eventually cut down with majorly, the newly created ministries for regional integration being scrapped.

As the year winds down, GhanaWeb brings a recap of which ministries were ‘killed’ in Akufo-Addo’s second term and which survived.

Office of the Senior Minister:

In a statement from the presidency at the beginning of the year 2021 however, it was confirmed that this ministry had been scrapped though specific reasons were not allocated.

“The Office of the Senior Minister has also been abolished,” the statement read in part.

The Aviation Ministry, headed by the late Joseph Kofi Adda was realigned and its functions added to those of its parent Ministry – the Transport Ministry.

Ministry of Inner-City and Zongo Development:

This Ministry was created in the first term of President Nana Akufo-Addo as a special development ministry to accelerate development in the Zongo communities and to bridge the development gap between the Zongos and other parts of the country.

The Ministry headed by Dr. Mustapha Abdul-Hamid was however realigned under the Local Governance Ministry.

The Business Development Ministry headed by Dr. Ibrahim Mohammed Awal was formed to create a sustainable and business-friendly, entrepreneurial and innovative business environment. It was one of the affected ministries in Akufo-Addo’s second government as it was scrapped and its functions added to the Trade and Industry Ministry.

The Monitoring and Evaluation, Planning, Regional Re-organisation and Development and Special Development Initiatives Ministries were the other four ministries which were scrapped.

According to the statement from the presidency in January, these ministries are being realigned because they had mostly achieved the reasons for which they were created.

“The president is realigning these special-purpose ministries because they have all achieved the purposes for which they were created,” the statement said in part.

In all, 28 Ministries were retained, a reduction from the previous 36 in the first Nana Addo Dankwa-Akufo-Addo-led government.

Source: www.ghanaweb.com
Related Topics:ministries
Up Next