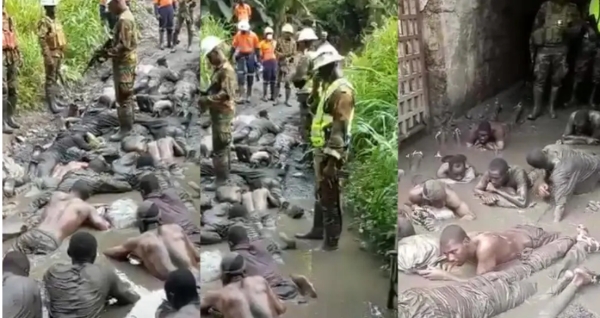 The minority in Parliament has condemned the alleged torturing of some young men purported to be illegal miners, by some men in uniform.

The young men, alleged to be illegal miners, were captured on video laying in mud with some uniformed men looking like soldiers, wielding guns over them.

The incident is alleged to have occurred on Friday, 15 July 2022 in Obuasi, Ashanti Region.

The men were allegedly tortured by the uniformed men while swimming in mud waters.

They are alleged to have sneaked into AngloGold Ashanti’s underground pits to mine despite cautions from the security men.

They were allegedly arrested while mining on the concession.

It is however unknown who gave the orders for the alleged miners to be tortured.

Reacting to the video, the minority spokesperson on Mines and Energy, John Jinapor, condemned the use of brute-force on the alleged illegal miners.

“We strongly condemn the use of brute, excessive and disproportionate force in the so-called fight against illegal mining.

“This flagrant disregard for our laws and constitution under the Akufo-Addo government is unfortunate and must be roundly condemned,”Mr Jinapor stated.

Previous PHOTOS: Real faces of your favourite celebrities without their makeup
Next Say goodbye to PE (premature Ejaculation) with these home remedies