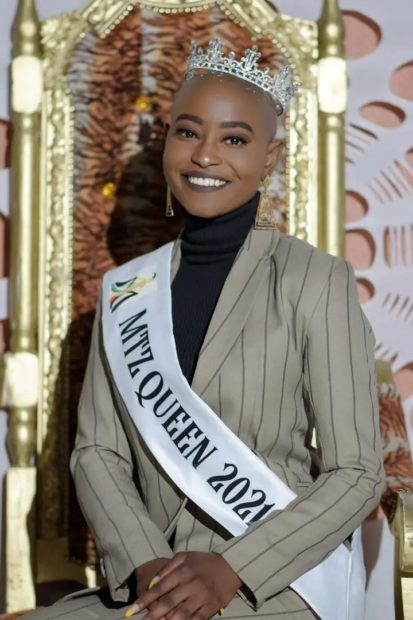 Another beauty queen has found herself in the midst of a scandal after her nudes were leaked on social media.

21-year-old model Chipo Mandiudza who was Miss Tourism Zimbabwe was dethroned two days after her crowning over the alleged incident.

Though the obscene images have not been released to the public, the management of the pageantry has called back her position over the fear of controversy.

In light of the latest reports, it has emerged that she was forced to resign.

Second-year Lupane State University student, Chipo Mandiudza is alleged to have been manipulated into resigning after reigning as Miss Tourism for just two days.

Speaking during an interview, Chipo’s manager Godwill “G-Factor” Tasunga refuted allegations that Chipo’s nudes were leaked on social media as he revealed that there were no nude pictures in the first place.

Tasunga claims the alleged ‘nudes’ are merely screen grabs from a raunchy display on Instagram Live that Chipo did.

Tasunga claims the Miss Tourism Zimbabwe pageant organizers coerced Chipo into writing a resignation letter after as they panicked from the public scrutiny over their selection of a winner in unclear circumstances.

Chipo’s controversial crowning sent tongues flapping in the pageantry industry as many questioned how she was nominated in the first place since there was no contest. Chipo was reportedly subjected to intense cyber scrutiny and criticism after her triumph.

Tasunga called out TMZ for its failure to support and protect Chipo during her short-lived reign as Miss Tourism Zimbabwe.

“They have given nothing for all her efforts. No prize money, no emotional support beyond fake assurances of support yet no public support. If anything, they have joined the bandwagon of misogynists, sexual predators, tribalists and judgmental armchair critics who all have no clue how rough and tough the world of beauty pageants really is…,” Tasunga said.

“She was saying it wasn’t her call and I didn’t understand that when she had willingly handed me the letter. I’m in Harare and so I told her to come here but unfortunately her mum has not been feeling well and she hasn’t gotten the chance to do so. She said she might be able to come on a Monday because we need to have a one-on-one discussion with her and understand what she says when she says it wasn’t her call.