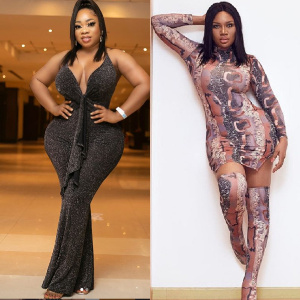 Repented Moesha Buduong has apologised to Sandra Ankobiah for spreading rumours that she had a boyfriend who peddled in drugs.

“Sandra, I’m very sorry for telling people that you had a boyfriend that was in jail for drugs, and I also heard it from people, and I never said it to make you look bad.

“Everyone talks about everyone in our industry. I know you’ve also spoken about me and laughed at my fake designers,” she said.

Moesha Buduong after her apology prophesied that Sandra Ankobiah will be married to her [Moesha] uncle. Their union, she said, will be epic.

“I know you love me because God brought you into my life and you will marry my uncle and you two will love each other.

“No one will ever cheat on their partners, and I will pray for God to protect your marriage and God will provide for you and my uncle,” she added.

Furthermore, she said Sandra Ankobiah who was previously a TV show host, and a lawyer, will find her way back into her law profession and will protect prisoners.

“You will go back to being a lawyer and you will defend prisoners and I will take people out of jail with the help of God Almighty and I will help many prostitutes to find a job and they will love us because we both date men for money and I will defend you because you are my in-law”, she mentioned.

Meanwhile, Moesha before concluding her message made allegations against Sandra.

In the last couple of days, Moesha has on several occasions prophesied to some celebrities and asked them to draw close to God with other details.

Before her recent post to Sandra, she prophesied to Hajia4Reall.

In a message she shared under the socialite turned musician’s Instagram post, Moesha told Hajia4Reall that she would do so well in the path she has taken (music) and have a fan base like that of dancehall artiste, Shatta Wale.