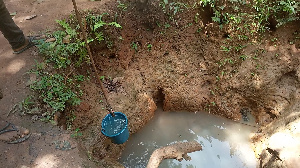 According to him, climate change, rapid population growth, urbanisation, and exploitation of water for competing economic activities such as agriculture, mining, and construction were threatening the continuous availability and accessibility of water on earth.

“Water scarcity is a global issue; as a result, water must be used responsibly,” he said.

Dr. Alhassan told the Ghana News Agency that groundwater, fed springs, rivers, lakes, and wetlands, as well as seeped into oceans were primarily recharged by rain and snowfall infiltrating the ground.

He said groundwater resources in Ghana were made up of three geological formations: the basement complex (metamorphic rocks and crystalline igneous), the consolidated sedimentary formations, and the Cenozoic and Mesozoic sedimentary rocks.

Groundwater was an important water resource in Ghana, contributing significantly to the country’s growing water demand.

Ghana’s rural water supply was primarily derived from groundwater and over 10,000 boreholes were located throughout the country, supplying water to both rural and urban households.

As a result, Dr. Alhassan said groundwater had a huge potential to contribute to the country’s water demand.

“Except for isolated cases of pollution and areas with high levels of iron, fluoride, and other minerals, Ghana’s groundwater quality is generally good,” he added.

“Salinity in certain groundwater occurrences is also found especially in some coastal aquifers. Nonetheless, this cannot be taken for granted, more efforts need to be made to protect groundwater from overexploitation and pollution,” he said.

“Groundwater can be extracted to the surface by pumps and wells, and without groundwater, life would be impossible. Groundwater provides a significant portion of the water used for drinking, sanitation, food production, and industrial processes,” according to Dr. Alhassan, “groundwater is also critical to the proper functioning of ecosystems like wetlands and rivers.”

Exploring, protecting, and using groundwater sustainably would be critical to surviving and adapting to climate change and meeting the needs of a growing population, according to the Lecturer.

Dr. Alhassan noted that Ghana’s groundwater regulations should be strictly enforced, saying, “through these efforts, we would be charting the path toward groundwater resource sustainability.”

He recommended that Integrated Water Resources Management (IWRM) – an integrated approach that promoted coordination among all stakeholders in the water sector – be fully implemented for sustainable, equitable, and efficient water resource use.