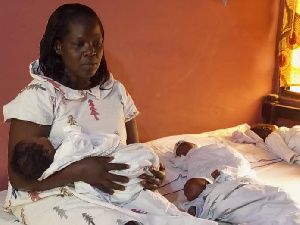 Three Members of Parliament, Muntaka Mubarak, Asawase, Kwabena Mintah Akandoh, Juaboso, Mark Kurt Nawaane Nabdam, Elizabeth Ofosu Adjare Techiman North, have filed a private members motion for a bi-partisan parliamentary committee to investigate the circumstances under which a pregnant woman died in an ambulance when she was being transported.

“That this honourable House constitute a bi-partisan committee to probe the circumstances leading to the death of Madam Augustina Awortwe who died in an ambulance when she was being transported from Holy Child Catholic Hospital at Fijai near Takoradi,” the motion dated February 1, 2022, said.

It is recalled that following news, the Western and Western North Regional Coordinator, National Ambulance Service, Dr Tawiah Siameh said that the doctor at the Holy Child Hospital Fijai in Sekondi-Takoradi got the referral wrong in the matter of the death of the 30-year-old nursing mother who was being transferred from Takoradi to Accra on referral.

Dr Tawiah Siameh explained in an interview with Johnnie Hughes on the New Day show on TV3 Thursday January 13 that there are basic things every doctor must know when it comes to referrals.

These include understanding the Ghana National Referral Policy Guidelines, assessing the patient’s situation, and taking into consideration the distance of the referral centre.

Asked whether the doctor who referred the deceased nursing mother got it wrong in making the referral decision, he answered ” Yes, he got it wrong.”

He further explained “You need to do an assessment of the patient’s situation, take into consideration the distance of the facility and the resources.

“If these were taken into consideration the best way is to have referred to the regional referral Centre [because] we have everything, we have the human resources, specialists, facilities.”

Speaking in an interview with Nhyiraba Paa Kwesi Simpson on Connect FM’s Omanbapa morning show, Mr. Yousif Kewura revealed that a disagreement between nurses and a doctor at the Holy Child Hospital Fijai in Sekondi-Takoradi might have caused the delay, which perhaps led to the death of the patient.

Narrating events leading to the death of his wife on Connect FM’s morning show, Mr Obiri Yeboah explained to the host that his wife successfully underwent surgery on Tuesday, January 4 at the Holy Child Hospital.

He had gone home and was preparing food for the wife when he received a call from his wife’s sister that his wife had suffered a complication and was to be transferred to the Korle Bu Teaching Hospital in Accra.

But Mr. Obiri Yeboah said the Ambulance Service officials demanded an amount of GH¢600 to enable them buy fuel.

He explained that the officials caused undue delay with their demand for the money.

“Whilst on our way to Accra, the [National] Ambulance Service personnel stopped and asked me to bring an amount of GH¢600 for fuel. I had only GH¢150 on me then, they took GH¢50 and bought the fuel. Right after buying the fuel, they returned to Takoradi whilst my wife was suffering,” he narrated.

But the NAS PRO insisted the Service cannot be blamed for the death.

“At the same time the hospital called and asked us to return and take the baby she delivered along. After getting to the hospital, there was a heated argument between the nurse and the doctor and that caused the delay and the subsequent death of the patient, so we cannot be blamed,” he stated.

Juaboso lawmaker, Kwabena Mintah Akandoh has called for the interdiction of the ambulance crew following the the death of the nursing mother who was being transferred from Takoradi to Accra on referral.

Following the death of the woman, the husband John Obiri Yeboah, accused personnel of the National Ambulance Service of gross unprofessionalism, leading to the death of his wife.

Speaking to journalists on Wednesday January 12, Mr Mintah Akandoh said “We will never leave this matter, we will pursue this matter to its logical conclusion. So far, we have listen to the family, we have listen tp the facility for the referral. There are more questions than answers that have been provided so far.

“So, for me, even at this hour if the ambulance driver and the crew are interdicted pending investigation that wont be bad at all.”