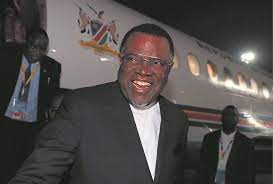 The Namibian presidency says there is no truth in allegations that President Hage Geingob inappropriately used his office to assist his African counterpart President Cyril Ramaphosa in an alleged cover-up of a cash heist at Ramaphosa’s game farm.

In a statement on Friday, the Namibian presidency said: “… certain individuals and a number of media houses, out of context and clearly motivated by malice or other ulterior motives, have been suggesting, without any factual basis, that the President of the Republic of Namibia, His Excellency Dr Hage G. Geingob, may have used his office, in a manner incompatible with the laws of the Republic of Namibia, to assist President Ramaphosa.”

News24 reported that a criminal complaint against Ramaphosa was laid by former spy boss Arthur Fraser over what exactly happened after the February 2020 theft.

However, the Namibian presidency said the details regarding the arrest of the suspect in Namibia on 14 June 2020 were matters of public record.

It said members of the Namibian police executed the arrest upon reasonable suspicion that the suspect in question had committed some immigration-related offences in Namibia.

“The suspect was, in accordance with the law, subsequently convicted by a criminal court in Namibia and paid a fine.”

It said the suspect left Namibia for South Africa in November 2020 after paying the fine.

“It follows from the above-stated facts that except for those who (motivated by bad faith and ulterior motives) would be quick to unnecessarily read something more into the statement of Mr Fraser, clearly, the statement does not suggest criminality.

“It also does not suggest that President Geingob may have in any way participated in and/or abetted foreigners in kidnapping and torturing any person, as maliciously and recklessly suggested by certain individuals in Namibia and South Africa.

“Such suggestions and insinuations are devoid of any truth in their entirety, and these were simply made to score cheap political points. The apprehension of suspects in Namibia is a constitutional and statutory duty of members of the Namibian police who, on reasonable suspicion that a person may have committed an offence, are mandated to effect an arrest if it is deemed appropriate and necessary.”

The presidency said it found statements by some political leaders in South Africa that a criminal investigation be conducted against Geingob to be “absurd and downright non-sensical”.

“The presidency, therefore, categorically denies insinuations that President Geingob may have acted inappropriately and/or participated or abetted in the apprehension of the individuals concerned.”

Previous If it were Ghana, they’d be praying for your death – Afia Pokuaa reacts to Justin Bieber’s ill-health
Next How unpopular Dr. Amoako Baah polled only 18 votes in NPP Chairmanship race