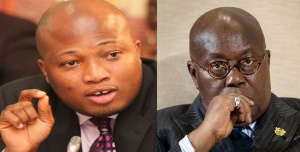 The Member of Parliament (MP) for North Tongu, Samuel Okudzeto Ablakwa says the Akufo-Addo-led government’s unbridled desire to build a National Cathedral as part of his political promises for the country will certainly not please God.

Backing his assertions with Biblical references, the outspoken NDC MP said “Jesus Christ will be much happy if we take care of the poor.”

“Mathew 25:34 stated clearly the urgency to support the poor. Failure to that you won’t make it to heaven,” he stated in an interview with NEAT FM’s morning show, Ghana Monte.

Mr Ablakwa was discussing the release of GH¢25 million for the construction of the National Cathedral by the Nana Addo-led government.

According to him, the release of the funds for the cathedral project shows how insensitive the government is to Ghanaians who are suffering due to the current economic challenges the country is facing.

He suggested that the money released by the president for the construction of the cathedral could be used to boost the economy to make living a better one for Ghanaians.

“The God we are serving is a compassionate God, he expects us to do what is right first. You [President Nana Addo] cannot ignore the hungry people and build a church for God. It is not right. As Christian leaders, we should do the right thing. We serve a compassionate God.” he bemoaned.

But president Akufo-Addo has previously stated that the National Cathedral project is as important as any development project in Ghana.

Speaking at the Museum of the Bible’s inaugural Africa lecture held in the US on Thursday, May 5, 2022, the president said that the cathedral is essential to finding the missing link in Ghana’s development.

Previous Soldier arrested over shooting incident at Zabarama Line
Next We’ll lose 2024 elections if it is based on public purse protection, corruption – Ken Agyapong