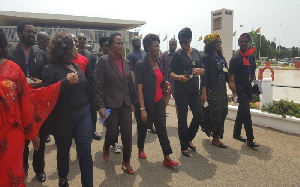 Members of the Minority in Parliament have announced their intention to embark on a series of picketing at the Kotoka International Airport, beginning Wednesday, March 30, 2022.

The exercise according to the minority is in protest of the mandatory COVID-19 Antigen Testing at the airport which they describe as illegal, ‘unconscionable and extortionist’.

“Pursuant to the Public Order Act, 1994 (Act 491), we the undersigned Members of Parliament on behalf of our Caucus and the Ghanaians we represent, duly notify your office of our irrevocable intentions to lead a series of picketing actions at the Kotoka International Airport from Wednesday the 30th of March, 2022.

“We are further resolved to converge at the precincts of the airport from 2pm to 6pm each day,” the minority in a statement co-signed by three of its members stated.

The government of Ghana as part of measures to curb the importation of COVID-19 into the country instituted a mandatory Antigen Testing at the airport.

The test was pegged at $150 for each disembarking passenger has been decried by many including Ghanaians arriving in the country.

Announcing its decision to protest the testing, the minority added that “it is our firm determination to sustain these mass picketing actions until such a time that the Akufo-Addo-led government curtails the illegal, unconscionable and extortionist COVID-19 antigen testing conducted by the iffy Frontiers Healthcare Services Ltd.”

Meanwhile the government has hinted of plans to review several of its COVID-19 management measures including the continuous closure of the nation’s land borders.